Jesus had just told Peter than he’d deny Jesus three times that night! Jesus was speaking in dark terms that surely terrified his disciples. They were likely in tears. (I would have been.)

Jesus offers an element of comfort. In effect, he says, “If you believe in God, then you should believe in me.” In this case, “believe” carries the thought of trust or reliance. He’s not saying “believe I’m the Son of God.” In context, he’s saying “believe I’ll take care of you.”

It’s a powerful thought: If you believe in God, you should believe that Jesus will take care of you. I like it.

It’s a beautiful thought. First, Jesus points out that his death will allow him to return to heaven to prepare a room for his friends. That’s a wonderful way of looking at things.

Notice that the KJV missed this translation. We don’t have “mansions” in heaven. We’ll have rooms. Rather than living several blocks away from Jesus, hoping for the occasional dinner invitation, we’ll live in his house with him! We’ll have our own room, but it’ll be in Jesus’ house. We’ll eat together, three meals a days.

Jesus describes heaven as a place of intimate closeness — like family — not at all like the subdivision with estate-sized lots we Americans imagine. I mean, why would anyone want to spend eternity in a private house on his own 50 acres when he could spend eternity sharing a house with family? 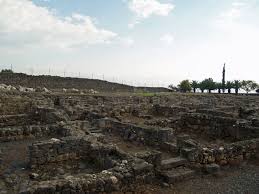 Ruins of insulae in Capernaum

First Century Jews loved family so much that they lived next door to their parents, that is, sons built their houses with a shared wall with their parents. They lived in insulae.

All you got was a room. Dinner was shared on the patio with family. Kids ran in the yard with their cousins.

(We’d better learn to get along, because we’re going to be spending a very long time very close together!)

Jesus promises to bring the disciples into eternity to live with Jesus forever. After all, they already know the way! They’ll be able to bear up through some tough times, knowing it will get better. Jesus will come again!

Thank you, Thomas, for asking, because Thomas’ question elicits this answer —

John’s Gospel offers no comfort to the universalist. Some argue that what Jesus means is that everyone comes to the Father through Jesus, whether he’s heard of him or not. But that is horribly out of context and foreign to the thought of the rest of the book.

No, Jesus is the way, and that means you have to know Jesus to know the way.

It’s interesting that in Acts the church is called “the Way.” That makes perfect sense if we see the church as Jesus’ body on earth — as his person extended and continued on this planet.

Jesus does not say that his words or his teachings are the truth. He says that he himself is the truth. This is, of course, much the same thought as calling Jesus the “word.” He is the word of truth. Jesus is the message.

So what’s the message? Well, that Jesus is the Son of God, the Messiah of prophecy. Yes. But it’s also that God so loved the world that send his very special Son to reveal to us the true nature of a much-misunderstood God. Indeed, much of Jesus’ mission, as reported in John, is to correct the Jewish worldview, their false conception of God. Hence, Jesus routinely healed on the Sabbath.

This is a little off subject, but not really. You see, many of the Jews who were upset that Jesus healed on the Sabbath weren’t mere legalists as we know legalism today. They had ancestors who died at the hands of the Greeks to honor the Sabbath during the Maccabean wars, beginning around 167 BC.

There were battles where Antiochus Epiphanes attacked on a Sabbath, knowing that many Jews would refuse to fight. The Jews lost many of those battles, and thousands died. Doubtlessly, their relatives and descendents revered them as heroes of the faith, who gave their lives to honor the Torah.

The Jews ultimately won their independence, but were reconquered by Rome in 63 BC. However, the Romans refused to attack on the Sabbath. Presumably they had no desire to appear unsporting — killing defenseless Jews. After all, Jews lived all over the Empire.

Rome was about power and control and taxation and had little interest in suppressing Judaism itself. They hoped to have a nice conquest with lots of tribute paid for many years. No reason to be rude. After all, the outcome of the battle was never in doubt regardless of the day they attacked. The Romans were irresistible in those days.

Therefore, when Jesus healed on the Sabbath, he didn’t just steps on the toes of a few over-zealous keepers of the Oral Law. He walked all over patriotism, nationalism, family identity, and indeed the very story that defined the relationship of many Jews to God.

It was their metanarrative; their framing story: We’re the people who love God so much that we’d give up our lives and even our freedom to honor the Sabbath! My great-great-grandfather died so you could have the freedom to celebrate the Sabbath! It was his sacrifice that persuaded the Romans to relent and let us worship as we see fit!

You see, Sabbath had become a very big deal by the time Jesus showed up. It was very nearly at the core of what it meant to be a Jew for a great many.

They enumerated about forty primary works, which they said were forbidden to be done on the Sabbath. Under each of these were numerous secondary works, which they said were also forbidden. . . . Among the primary works which were forbidden, were ploughing, sowing, reaping, winnowing, cleaning, grinding, etc. Under the head of grinding, was included the breaking or dividing of things which were before united. . . . Another of their traditions was, that, as threshing on the Sabbath was forbidden, the bruising of things, which was a species of threshing, was also forbidden. Of course, it was violation of the Sabbath to walk on green grass, for that would bruise or thresh it. So, as a man might not hunt on the Sabbath, he might not catch a flea; for that was a species of hunting. As a man might not carry a burden on the Sabbath, he might not carry water to a thirsty animal, for that was a species of burden; but he might pour water into a trough, and lead the animal to it. . . . Yet should a sheep fall into a pit, they would readily lift him out, and bear him to a place of safety. . . . They said a man might minister to the sick for purpose of relieving their distress, but not for the purpose of healing their diseases. He might put a covering on a diseased eye, or anoint it with eye-salve for the purpose of easing the pain, but not to cure the eye.

According to Adam Chalom,

While the concept of work being prohibited on Shabbat is well known, less well-known is the tradition of additional dietary restrictions on Shabbat. It turns out that healing on Shabbat is prohibited, so taking certain herbs or remedies are actually forbidden during the day of rest. Thus certain leaves are said to have no medicinal properties, and thus are permitted to use on Shabbat. Or if one bangs their hand or foot, they may soak it in wine to reduce swelling, but not vinegar since that would too obviously be healing! And the delicate, who are healed by wine, cannot even do that, according to Rabbi Hillel (not the same as the early Hillel) who attended the academy of Rabbi Kahana.

Thus, the Sabbath had very nearly become an idol. After all, they were far more concerned with scrupulous Sabbath observance than worshiping the Son of God.

So why did Jesus heal on the Sabbath? To poke his finger in the eye of idolatry. Jesus is the way. Not Shabbat keeping — certainly not in this way. It was time for the Jews to meet God himself and learn his real passions.