John’s Gospel: Reflections on Chapter 10 (“My kingdom is not of this world”), Part 1

John 10 is based on Ezekiel 34, in which God condemns the “shepherds” of Judah shortly before he allowed Nebuchadnezzar to destroy Jerusalem and the Temple.

He is not speaking to the counselors of the Jews; he is speaking to their religious and political leaders — the king, the aristocracy, the chief priest — all those who “rule” over Judah.

In context, “weak,” “sick,” “injured,” and “strayed” do not refer to Jews going through divorces or losing loved ones. Rather, Ezekiel condemns the leaders for letting the Jews slip back, once again, into idolatry. His complaint is their poor spiritual health — idolatry in particular — not their poor emotional health.

This passage marks the beginning of the end for the Davidic dynasty — the descendants of David who had ruled Judah for hundreds of years. God was going to let Babylon carry them all off.

Now, if you grew up in church, at some point you likely studied the kings of Israel and Judah. You surely remember that there were good kings and bad kings. Hezekiah and Josiah, for example, were among the precious few good kings, heroes of the faith.

For example, the scriptures record as to Hezekiah —

(2Ki 18:3-6 ESV) 3 And he did what was right in the eyes of the LORD, according to all that David his father had done.  4 He removed the high places and broke the pillars and cut down the Asherah. … 5 He trusted in the LORD, the God of Israel, so that there was none like him among all the kings of Judah after him, nor among those who were before him.  6 For he held fast to the LORD. He did not depart from following him, but kept the commandments that the LORD commanded Moses.

Hezekiah ruled well for many years. But see what happened as soon as he died —

2 Kings 21:1 Manasseh was twelve years old when he began to reign, and he reigned fifty-five years in Jerusalem. His mother’s name was Hephzibah.  2 And he did what was evil in the sight of the LORD, according to the despicable practices of the nations whom the LORD drove out before the people of Israel.  3 For he rebuilt the high places that Hezekiah his father had destroyed, and he erected altars for Baal and made an Asherah, as Ahab king of Israel had done, and worshiped all the host of heaven and served them.  4 And he built altars in the house of the LORD, of which the LORD had said, “In Jerusalem will I put my name.”  5 And he built altars for all the host of heaven in the two courts of the house of the LORD.

Hezekiah’s oldest son completely reversed the reforms of his father. Indeed, it gets
worse —

(2Ki 21:6 ESV)  6 And he burned his son as an offering and used fortune-telling and omens and dealt with mediums and with necromancers. He did much evil in the sight of the LORD, provoking him to anger.

But what about the people who’d lived a generation under Hezekiah’s rule? Did they resist Manasseh’s corruptions?

(2Ki 21:9 ESV)  9 But they did not listen, and Manasseh led them astray to do more evil than the nations had done whom the LORD destroyed before the people of Israel.

This is what Ezekiel was railing against — disgusting idolatry committed by the people under the leadership of idolatrous kings. But that’s not the point I want to make.

The real point is that Hezekiah failed. He used the power of the state to destroy idolatrous shrines. He made idolatry illegal. He strongly supported obedience to the Torah and the worship of God. He even led by example. 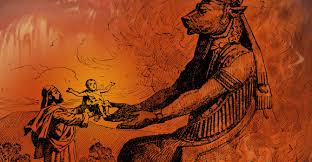 The oldest son was often burned alive as a sacrifice to Molech.

But he didn’t even convert his eldest son. His grandson was burned alive as a sacrifice to a pagan idol.

In terms of long-term influence on Judean society, Hezekiah’s reign was a complete disaster. His spiritual reforms achieved nothing that survived him. He even lost his own family to idolatry. Those are the cold, brute facts. What do we learn?

Well, let’s go back to Ezekiel 34. What was God’s solution for Manasseh? For idolatry?

(Eze 34:15-16 ESV)  15 “I myself will be the shepherd of my sheep, and I myself will make them lie down, declares the Lord GOD.  16 I will seek the lost, and I will bring back the strayed, and I will bind up the injured, and I will strengthen the weak, and the fat and the strong I will destroy. I will feed them in justice.”

Rather than finding a better earthly king, God’s solution is to become the shepherd himself. God decided to step in and rule where even the best human kings utterly failed. The solution is not better kings or better government; the solution is God.

How would God do this?