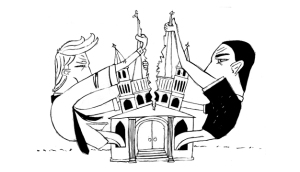 Well, I was not expecting to find baptism and communion to be important hermeneutical principles, but as I read Paul’s arguments in particular, I am struck at how many times he refers to baptism or the Lord’s Supper as instructive for our behavior in other contexts. Paul argues from these while we argue about these. Surely this fact alone tells us how far removed we are from the apostolic mindset.

In both passages we see Paul accepting baptism or the Lord’s Supper as normative for all Christians — not an optional practice that some may or may not accept — and thus available to build universally applicable arguments.

In both cases, Paul builds a case for unity from these two distinctive institutions (Alexander Campbell’s term). We are all baptized into Christ, and thus we all belong to one person who is not divided. Therefore, we cannot let ourselves be divided.

We all share in the cup and loaf of communion, and so, again, we are an indivisible one.

Hence, these practices have meanings much deeper and richer than just the commands to be baptized and to take communion. Indeed, they’re barely even about commands. If we don’t see the larger truths behind the commands, then mere obedience to the commands is of little consequence.

God has no interest in seeing us get wet for the sake of wetness! And eating some bread and drinking a sip of grape juice is hardly valuable for its own sake. It’s not much of a meal. Rather, the fact that we take a common meal with our brothers and sisters reminds us of the community we’ve been added to and all that Jesus did for us so that we could be part of that community.

However, neither baptism nor communion is a “work” as neither has intrinsic merit. We are not more moral because of taking communion or submitting to baptism, and we can’t chew and sip our way into heaven.

The Churches of Christ have incomplete theologies of baptism and the Lord’s Supper. We tend to see them in terms of something to be obedient to rather than an opportunity to participate in what they symbolize. We take great pride in honoring these practices as the church did in the First Century — which is a good thing, I think — but we fail to give them the full significance they had in the First Century.

For example, our persistence in division plainly denies the unity that both symbolize. And many of us deny the full power of the grace that both evidence. For example,

(Rom. 6:4-8,23) We were therefore buried with him through baptism into death in order that, just as Christ was raised from the dead through the glory of the Father, we too may live a new life. If we have been united with him like this in his death, we will certainly also be united with him in his resurrection. For we know that our old self was crucified with him so that the body of sin might be done away with, that we should no longer be slaves to sin-because anyone who has died has been freed from sin. Now if we died with Christ, we believe that we will also live with him.

… For the wages of sin is death, but the gift of God is eternal life in Christ Jesus our Lord.

Romans 6, which is all one discussion, deals primarily with Christian ethics, living a life freed from sin because of the meaning of our baptism. But intrinsic to that message is the fact that our baptism shows us that we will live again just as Jesus lived again.

Thus, when we impose a works-based religion on our brothers by demanding doctrinal perfection, we deny the meaning of baptism. It’s great to insist on baptism. The Bible teaches baptism. But it’s a mockery of the institution to deny the grace that baptism symbolizes.

Just so, taking the Lord’s Supper weekly is an ancient, even apostolic practice. Good for us! It means nothing if we divide and bitterly dispute over every minutiae of doctrine. Communion is about community and unity. Bring a divisive attitude to the institution and you’ve sinned against it.

“Body of the Lord” has a double meaning. It refers, of course, to physical body of Jesus, sacrificed on the cross for us. But it also refers to the church — the body of Christ. After all, the sins Paul was condemning are —

(1 Cor 11:18-21)  In the first place, I hear that when you come together as a church, there are divisions among you, and to some extent I believe it. 19 No doubt there have to be differences among you to show which of you have God’s approval. 20 When you come together, it is not the Lord’s Supper you eat, 21 for as you eat, each of you goes ahead without waiting for anybody else. One remains hungry, another gets drunk.

Division, rudeness, drunkeness. The Corinthians were sinning, first, against their brothers and sisters and, therefore, against Christ.

Division in a church risks drinking judgment on oneself. It’s hard to imagine a more serious mistake.

My name is Jay Guin, and I’m a retired elder. I wrote The Holy Spirit and Revolutionary Grace about 18 years ago. I’ve spoken at the Pepperdine, Lipscomb, ACU, Harding, and Tulsa lectureships and at ElderLink. My wife’s name is Denise, and I have four sons, Chris, Jonathan, Tyler, and Philip. I have two grandchildren. And I practice law.
View all posts by Jay F Guin →
This entry was posted in Blue Parakeet, CENI, Uncategorized and tagged All, Baptism, Blue Parakeet, CENI, Church of Christ Links, communion, Eucarist, Hermeneutics, Lord's Supper, Scot Mcknight. Bookmark the permalink.

28 Responses to CENI/Blue Parakeet: Baptism and the Lord’s Supper