Faith Lessons by Ray Vander Laan: On the Prodigal Son and Thinking the Eastern Way, Part 1 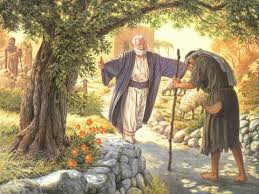 The Western mode of thought comes from the ancient Greeks. We think abstractly. We like to take what we learn apart, see how it’s made, and extract the underlying principles.

RVL’s students in high school have to dissect a frog in their biology classes. When they cut a frog apart and look inside, they learn many truths about the frog. They learn how his heart works, how his lungs work, and so on. They never learn who his girlfriend is. You can only learn who the frog’s mate is by observing him in the wild. You can’t take him out of the pond and learn how he lives.

The Western approach to a frog is to dissect it. The Eastern approach is to learn the frog’s story. Both approaches gain truths. But you can’t truly understand much of what’s written in the Bible unless you study it in its native environment before you take it apart. After all, many of the scriptures were written by Easterners for Easterners.

Consider the Parable of the Prodigal Son.

(Luke 15:17-22)  “When he came to his senses, he said, ‘How many of my father’s hired men have food to spare, and here I am starving to death! 18 I will set out and go back to my father and say to him: Father, I have sinned against heaven and against you. 19 I am no longer worthy to be called your son; make me like one of your hired men.’ 20 So he got up and went to his father.

“But while he was still a long way off, his father saw him and was filled with compassion for him; he ran to his son, threw his arms around him and kissed him.

21 “The son said to him, ‘Father, I have sinned against heaven and against you. I am no longer worthy to be called your son.’

22 “But the father said to his servants, ‘Quick! Bring the best robe and put it on him. Put a ring on his finger and sandals on his feet.”

Notice that the father ran to the son. In Palestine, fathers do not run. It’s considered extraordinarily undignified. And they certainly don’t run toward a sinful son. Rather, honor requires that the son come to the father. For the father to run toward the son, before the son has apologized, would have been shameful. And yet this father was willing to suffer humiliation just to reach his son a few minutes sooner.

The father embraced the son before he expressed his repentance. Indeed, the son only intended to ask for a job so he could eat. He had no intention of asking for forgiveness, only a little mercy.

We typically ignore both the cultural environment of the story and its textual environment. The story is preceded with —

(Luke 15:1-2)  Now the tax collectors and “sinners” were all gathering around to hear him. 2 But the Pharisees and the teachers of the law muttered, “This man welcomes sinners and eats with them.”

What did the father do in the story? He ate with the prodigal son — a son who’d been shamed and humbled. The father suffered humiliation to do so. And who is the father?

The father is God. And who was suffering shame for eating with humble sinners? Jesus. Jesus was doing exactly what the father does in the story — hurrying to meet sinners coming toward him, before they even realize how much grace is available — and eating with them, in that culture, a sign of acceptance and even protection.

Jesus was claiming to be God — and to be a God who acted in this wondrous way, a way of behavior utterly foreign to those who criticized him. Indeed, his critics were being caricatured as the older brother —

(Luke 15:29)  But he answered his father, ‘Look! All these years I’ve been slaving for you and never disobeyed your orders. Yet you never gave me even a young goat so I could celebrate with my friends.”

This is a rebuke. This older son never learned to be like his father and reacted to his brother’s return selfishly and lovelessly. And yet God is gracious even to the older brother —

Imagine being in the crowd and hearing Jesus treat both the “sinners” and Pharisees with such compassion, while putting himself in God’s place. It would have been obvious that the Pharisees were God’s children, but children who were severe disappointments who had totally misunderstood their father’s heart. And the God that Jesus portrays would be far more attractive than the God presented by the Pharisees.

My name is Jay Guin, and I’m a retired elder. I wrote The Holy Spirit and Revolutionary Grace about 18 years ago. I’ve spoken at the Pepperdine, Lipscomb, ACU, Harding, and Tulsa lectureships and at ElderLink. My wife’s name is Denise, and I have four sons, Chris, Jonathan, Tyler, and Philip. I have two grandchildren. And I practice law.
View all posts by Jay F Guin →
This entry was posted in Faith Lessons by Ray Vander Laan, Uncategorized and tagged All, Faith Lessons, Prodigal Son, Ray Vander Laan. Bookmark the permalink.

10 Responses to Faith Lessons by Ray Vander Laan: On the Prodigal Son and Thinking the Eastern Way, Part 1