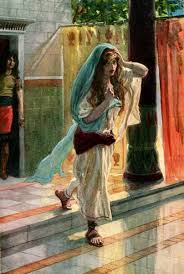 (2Sa 13:1-2 ESV) Now Absalom, David’s son, had a beautiful sister, whose name was Tamar. And after a time Amnon, David’s son, loved her.  2 And Amnon was so tormented that he made himself ill because of his sister Tamar, for she was a virgin, and it seemed impossible to Amnon to do anything to her.”Do anything to her” is surely a euphemism, as we’ll see, for “have sex with her.”

(Lev 18:9 ESV) 9 You shall not uncover the nakedness of your sister, your father’s daughter or your mother’s daughter, whether brought up in the family or in another home.

The story gets worse —

(2Sa 13:3-6 ESV)  3 But Amnon had a friend, whose name was Jonadab, the son of Shimeah, David’s brother. And Jonadab was a very crafty man.  4 And he said to him, “O son of the king, why are you so haggard morning after morning? Will you not tell me?” Amnon said to him, “I love Tamar, my brother Absalom’s sister.”  5 Jonadab said to him, “Lie down on your bed and pretend to be ill. And when your father comes to see you, say to him, ‘Let my sister Tamar come and give me bread to eat, and prepare the food in my sight, that I may see it and eat it from her hand.'”  6 So Amnon lay down and pretended to be ill. And when the king came to see him, Amnon said to the king, “Please let my sister Tamar come and make a couple of cakes in my sight, that I may eat from her hand.”

The king so commanded.

(2Sa 13:7-10 ESV)  7 Then David sent home to Tamar, saying, “Go to your brother Amnon’s house and prepare food for him.”  8 So Tamar went to her brother Amnon’s house, where he was lying down. And she took dough and kneaded it and made cakes in his sight and baked the cakes.  9 And she took the pan and emptied it out before him, but he refused to eat. And Amnon said, “Send out everyone from me.” So everyone went out from him.  10 Then Amnon said to Tamar, “Bring the food into the chamber, that I may eat from your hand.” And Tamar took the cakes she had made and brought them into the chamber to Amnon her brother.

Amnon took advantage of his opportunity —

(2Sa 13:11-13 ESV)  11 But when she brought them near him to eat, he took hold of her and said to her, “Come, lie with me, my sister.”  12 She answered him, “No, my brother, do not violate me, for such a thing is not done in Israel; do not do this outrageous thing.  13 As for me, where could I carry my shame? And as for you, you would be as one of the outrageous fools in Israel. Now therefore, please speak to the king, for he will not withhold me from you.”

This is surprising. Tamar suggests that Amnon let the king give her to him — “for he will not withhold me from you.” Certainly, in those days a king could give his daughter in marriage. Indeed, any father could do so, as arranged marriages were the norm and Tamar would have had little say in the matter.

Perhaps she was stalling to gain time, hoping she could leave and beg the king to protect her.

Not only was incest forbidden, it was a disgrace meriting being “cut off” — thought by many to refer to capital punishment. Others consider it a reference to banishment.

(Deu 22:28-29 ESV) 28 “If a man meets a virgin who is not betrothed, and seizes her and lies with her, and they are found,  29 then the man who lay with her shall give to the father of the young woman fifty shekels of silver, and she shall be his wife, because he has violated her. He may not divorce her all his days.”

The Law required that following a rape the man must marry the girl and may not divorce her. This was a way of preserving honor.

This is why Tamar begged Amnon not to send her away. Better to be married to an ogre than to no longer be virgin and shamed. That was the culture of the day.

To “send away” or “put away” is the language of divorce. While they weren’t married, he was bound by law to marry her. To refuse to marry her was tantamount to a divorce — which was forbidden in this case. Her word choice reminded Amnon of his legal duty, which he ignored, just as he’d ignored his moral duty not to rape his half-sister.

Commentators note the parallels with David and Bathsheba. Both stories have the man on a couch. Both have the woman brought in by servants. Both involve illegal sexual relations. Amnon’s sin is a result of David’s sin, that is, David’s failure to show a moral example leads to further sin of the very same sort. And, indeed, we see as the story progresses that David was not at all a good father, as he did nothing to respond to Tamar’s disgrace by Amnon.

So why did Amnon hate her? Why did his feelings suddenly change? Was he a man who only wanted what he couldn’t have? (Who would that remind you of?)

(2Sa 13:17-19 ESV)  17 He called the young man who served him and said, “Put this woman out of my presence and bolt the door after her.”  18 Now she was wearing a long robe with sleeves, for thus were the virgin daughters of the king dressed. So his servant put her out and bolted the door after her.  19 And Tamar put ashes on her head and tore the long robe that she wore. And she laid her hand on her head and went away, crying aloud as she went.

Tearing her robe symbolized the loss of her virginity.

Absalom tried to comfort her, but the result was that Tamar lived a tragic life. So why didn’t David, the king and a judge of the people, not punish Amnon? Why did he do nothing to improve Tamar’s lot? Was he too indulgent? Did women count for nothing in his mind?

As the oldest son, was David that blind to Amnon’s weakness? Was David too conscious of his own sinfulness to impose moral standards on others?

My name is Jay Guin, and I’m a retired elder. I wrote The Holy Spirit and Revolutionary Grace about 18 years ago. I’ve spoken at the Pepperdine, Lipscomb, ACU, Harding, and Tulsa lectureships and at ElderLink. My wife’s name is Denise, and I have four sons, Chris, Jonathan, Tyler, and Philip. I have two grandchildren. And I practice law.
View all posts by Jay F Guin →
This entry was posted in 2 Samuel, 2 Samuel, Uncategorized. Bookmark the permalink.

One Response to Wiki-Lessons: Amnon and Tamar