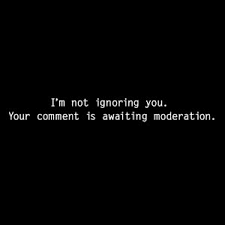 I wrote only a few days ago,

* I’m not keen on tolerating “fighting words.” If you call your opponent a liar or accuse him of being dishonest, your comment will be deleted and I just might block you. If you think he’s being dishonest, then you’ll just have to find a more delicate way to express yourself. It’s a healthy exercise. There are other fighting words, but “liar” is the most commonly used one.

The fact is, that I’ve very rarely thought someone here was being dishonest, and those who are tend to get moderated or blocked entirely. If you think someone is lying, don’t make a public accusation. Email me and I’ll contact him and try to resolve the problem. If I agree that we have a liar here, I’ll likely block him. But it’s unacceptable to call someone a “liar” or impugn his honesty in the comment section.

* Attacks that impugn the character of the other person will be deleted and will lead to moderation.

I just issued far too many warnings on this point. I’m not in the mood to put up with this rash of calling others here liars, dishonest, deceivers, and such like.

You are advised to stay far away from the line, because I’m taking ambiguous allegations as violating the rules.

I’ve blacklisted one reader for 30 days for this reason just this week. I find it unpleasant in the extreme to have to call readers down or to block their comments. But these accusations of dishonesty are not going to continue.

My name is Jay Guin, and I’m a retired elder. I wrote The Holy Spirit and Revolutionary Grace about 18 years ago. I’ve spoken at the Pepperdine, Lipscomb, ACU, Harding, and Tulsa lectureships and at ElderLink. My wife’s name is Denise, and I have four sons, Chris, Jonathan, Tyler, and Philip. I have two grandchildren. And I practice law.
View all posts by Jay F Guin →
This entry was posted in Commenting, Uncategorized. Bookmark the permalink.