The Fork in the Road: “The Way of UNITY between “Christian Churches” and Churches of Christ,” Part 9 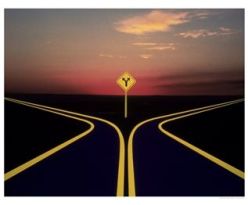 In the last post of this series, I discussed an understanding of the Holy Spirit that helps explain how God’s grace works in the individual Christian and gives an insight as to the nature of our salvation.

It occurred to me that it might be helpful to reflect a bit more deeply on the subject. After all, one of the climactic passages in Romans is chapter 8, and the first several verses deal with the Spirit.

Sadly, a word-only understanding of Romans 8 is not only erroneous, it deprives the passage of its power, making it mean little more than “read the Bible and obey” — which is hardly different from what God told the Jews 1,500 years before — and thus reduces salvation to our own ability to obey what is written.

Now, the New Testament is replete with allusions to the Exodus. We miss most of them because we’ve not read much of the Torah and because we’ve not been taught to search for the references. Thus, even excellent commentaries often overlook some of the meaning Paul thought would be obvious to his readers. Romans 8 is no different.

(Rom 7:6 ESV)  6 But now we are released from the law, having died to that which held us captive, so that we serve in the new way of the Spirit and not in the old way of the written code.

We have to take Paul’s use of “law” to be primarily a reference to the Torah, although the principle applies to all that we perceive to be works of law that save us.

Paul ironically speaks of the Torah — given to Israelites freed from slavery only weeks before — as holding God’s people “captive.” True freedom, Paul argues, comes only by the Spirit and not by a book of statutes — even a book inspired by God.

“Spiritual” means “from the Spirit.” But even though the Torah is from God by the Spirit, the result was to sell Paul (and each of us) “under sin” because he remained enslaved to sin. Despite knowing God’s will, he cannot obey it — not entirely — and thus finds himself sold, like Joseph, into slavery.

But the passages says “no condemnation.” This is the continuous forgiveness promised by 1 John 1:7. It lasts until we fall away, not by sinning (we all sin) but by rebelling. Hebrews explains this in terms of the Exodus, as well.

Paul continues with his Exodus analogy —

Where does this idea of the Spirit dwelling in us come from? Well, as you might expect, Exodus —

(Exo 29:43-46 ESV) 43 There I will meet with the people of Israel, and it shall be sanctified by my glory.  44 I will consecrate the tent of meeting and the altar. Aaron also and his sons I will consecrate to serve me as priests.  45 I will dwell among the people of Israel and will be their God.  46 And they shall know that I am the LORD their God, who brought them out of the land of Egypt that I might dwell among them. I am the LORD their God.

The Torah speaks of God himself dwelling with his people, by his special presence in the sanctuary (tabernacle).

The book of Exodus ends as follows:

How is that for an exciting climax? They’d not yet reached the Promised Land, but God himself entered the tabernacle and from there led the people through the desert to the land flowing with milk and honey.

That’s not the end of the story, but there could be no doubt how the story would end. God claimed his people as his own and took on the task of seeing them through to the end himself.

Thus, when Paul speaks of the Spirit “dwelling” in each of us, the allusion to Exodus and the tabernacle should be obvious. God has a special presence within each of us, in some sense he dwells within us, and he personally leads us through the desert to the Promised Land through the Spirit.

“Led by the Spirit” means just what? Well, again, we turn to the account of the Israelites in the desert, and we find —

(Deu 8:2 ESV) And you shall remember the whole way that the LORD your God has led you these forty years in the wilderness, that he might humble you, testing you to know what was in your heart, whether you would keep his commandments or not.

(Deu 8:14-16 ESV) 14 then your heart be lifted up, and you forget the LORD your God, who brought you out of the land of Egypt, out of the house of slavery,  15 who led you through the great and terrifying wilderness, with its fiery serpents and scorpions and thirsty ground where there was no water, who brought you water out of the flinty rock,  16 who fed you in the wilderness with manna that your fathers did not know, that he might humble you and test you, to do you good in the end.

(Deu 32:11-12 ESV)  11 Like an eagle that stirs up its nest, that flutters over its young, spreading out its wings, catching them, bearing them on its pinions,  12 the LORD alone guided [led] him, no foreign god was with him.

The theme of God “leading” Israel through the desert is an important one, pervading Deuteronomy 8 and recapitulated in chapter 32.

Now, the conclusion is surely obvious. God leads us today through his Spirit — who dwells within us — in much the same way that he led Israel in the desert. He shows the way. He provides bread and water.

So how does God show the way today? By smoke and fire? Well, of course, not exactly. After all, the way is no longer marked out by sand and wadis. Now the path to the Promised Land is faith, hope, and love.

I’m not a big fan of the idea that we can pray to God to find a parking space. It’s not too trivial for God to do, but it is to trivial to ask. God is not our valet, and we should not trivialize what we are called to do. Indeed, God never promises to make our life easy. He’ll show us the way through the desert to the Promised Land and he’ll keep us fed and give us water, but it’s still desert.

No, he guides us foremost by writing his laws on our hearts and on our minds. That’s the promise. And the laws he writes are laws that shape our hearts into Christ-like hearts. And to be Christ-like is to serve, submit, and sacrifice for others. It’s love in the deepest sense of “love.” It’s love that costs everything. And as our hearts are transformed to become like God’s own heart, we are prepared for an eternity with him.

Now, the conservative and charismatic will both complain that I’ve been too reductionistic. The conservative wants a book of written laws, even if they have to find the laws in the silences — a pretty good sign that God has other purposes in mind for his book. The charismatic wants a healing or, at least, a tongue or two.

The conservative is not wrong to seek written guidance, so long as he takes the inspired guidance as being about what it says it’s about — how to be like Jesus, how to love like Jesus, even how to be a husband like Jesus. The charismatic is not wrong to seek more from the Spirit than love, but 1 Corinthians 13 makes clear that love is enough — indeed, the goal of all spiritual gifts. Miss this, and you miss it all.

And so, here’s the boundary: if you take the New Testament and turn it into a series of commands that have nothing to do with love or the nature of God as imprinted on his people by the Spirit, you’ve missed it. It’s not about obeying a list of positive laws to earn your way to heaven. Indeed, that approach to law is slavery, and insisting on such a thing puts you in company with the Israelites who begged to return to the comforts of Egypt and slavery. (Their story does not end well. I would not care to join them.)

Just so, Christianity is not about spectacular gifts of the Spirit. If God gives quail instead of manna, praise God! If God wants to part the Jordan River for us, that’s God’s business. Celebrate and do not blaspheme the Spirit! If not, we swim. And in the meantime, the desert is good enough, because God is with us, showing the way, and providing all the water and manna we really need.

My name is Jay Guin, and I’m a retired elder. I wrote The Holy Spirit and Revolutionary Grace about 18 years ago. I’ve spoken at the Pepperdine, Lipscomb, ACU, Harding, and Tulsa lectureships and at ElderLink. My wife’s name is Denise, and I have four sons, Chris, Jonathan, Tyler, and Philip. I have two grandchildren. And I practice law.
View all posts by Jay F Guin →
This entry was posted in Fork in the Road, The Way of UNITY between the "Christian Churches" and Churches of Christ, Uncategorized. Bookmark the permalink.

10 Responses to The Fork in the Road: “The Way of UNITY between “Christian Churches” and Churches of Christ,” Part 9