John’s Gospel: “Who Is This ‘Son of Man’?” (the invisibility of Jesus’ Jewishness)

Well, we started this — months ago — with this question: Who is this “Son of Man”? The question is borrowed from —

(John 12:34 NIV) The crowd spoke up, “We have heard from the Law that the Messiah will remain forever, so how can you say, ‘The Son of Man must be lifted up’? Who is this ‘Son of Man’?”

We discussed many posts ago the meaning of the phrase “Son of Man” to Jesus and his audience. It was an ambiguous phrase that could refer either to a human (in the Hebrew, it is literally “son of adam”) or to the Messiah (Dan 7:13). However, the phrase did not normally mean “Messiah” to a First Century Jew, allowing Jesus to be intentionally ambiguous when it suited him.

But now, having finished John and thought quite a bit about the text, we return to the deeper meaning of the question: “Who is Jesus?” Yes, he’s the second member of the Godhead. Yes, he’s the son of Mary, conceived by the Holy Spirit. But would you want to eat breakfast with him at Hardee’s? Would you want him in your small group? As a preacher?

We Christians constantly speak of following Jesus or deciding: What would Jesus do? And all these questions assume that we have a good sense of who he is. And we don’t.

Let’s be honest — it’s hard to get a handle on Jesus. He’s not a regular guy. He’s different from anyone else you’ve ever met.

Worse yet, we come to Jesus with sorts of preconceptions, and most of them are horribly 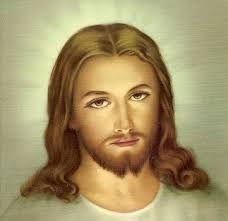 wrong. For example, there’s this doe-eyed, asexual, even androgynous version of Jesus that’s popular in some circles. (Is this the version for middle-school girls?) 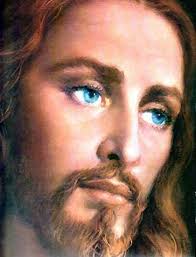 Worse yet, there’s the blue-eyed, Aryan version. How does a Jewish Jesus, descended from Abraham, look nearly Scandinavian?

And — again — why so pretty? The Bible just plain doesn’t describe Jesus as pretty. In fact, we’re told the opposite —

(Isa 53:2 ESV) 2 For he grew up before him like a young plant, and like a root out of dry ground; he had no form or majesty that we should look at him, and no beauty that we should desire him.

The Jesus of John’s Gospel had a way of disappearing into the crowds. The Jewish authorities needed to pay Judas to identify him. He must have looked very, very ordinary
— and the ordinary First Century Jew did not look like boy-band singer or a male model. 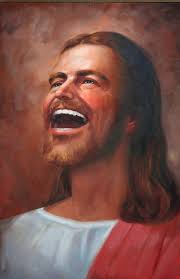 And why does he have to look all girly dreamy? Why can’t Jesus laugh? That’s not my favorite portrait, but at least he looks, you know, human — and not stoned (in the drugged sense).

This picture — with shorter hair and a bigger nose — is surely closer to reality, although the drawing is just too similar to some caveman paintings I’ve seen. (And isn’t he a little cross-eyed?) 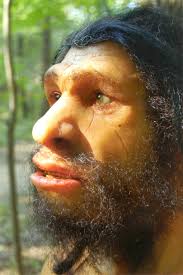 So, you see, the artists entirely fail to be realistic. Either they make him look Neanderthal or else asexual, unemotional, spaced out, and effeminate. 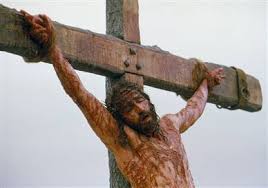 At least The Passion gets the level of suffering right.

But we still are forced to see a Gentile Jesus. Why can’t Jesus be Jewish? And won’t our artists even try to get him historically right?

Ahh … that just show how very far removed our understanding of Jesus is from reality. It’s bothers us when he seems very human. We struggle to imagine him laughing or being angry or experiencing any real human emotion. Maybe we’re afraid that if Jesus were to have emotions (other than spaced-out, doe-eyed love), he might be a threat.

In fact, if the artistic impressions of Jesus tell us anything, it’s that we want a neutered, impotent Jesus — because, truth be told, we’re just a little afraid of Jesus. We want him nice and harmless — and very, very Gentile.

There’s a story we need to know to help us get some perspective. It begins with Martin Luther — a brilliant theologian who kicked off the Reformation in Germany. Luther hated Jews — and his writings against the Jews were crude and bigoted. Thus, he gave permission to much of Europe to be “good” Christians while hating all things Jewish.

A few hundred years later, in the 19th and early 20th Centuries, the center of Protestant theology was Germany. And some of the world’s most brilliant theologians were German anti-Semites. As a result, the Christianity of America — which was highly dependent on German scholarship in those days — filtered the Jewish roots out of Christianity and Christ.

The Old Testament was dismissed as primitive and backwards. The Torah was not fulfilled in Jesus — it’s was “repealed.” Judaism was not the foundation on which Christianity is built, but rather Christianity is an entirely different “dispensation” that rejects the legalism and false understandings of the “backwards” Jews.

Today, there’s even a segment of Church of Christ preachers who teach that the Gospels are part of the Old Testament and hence not binding on Christians at all, because Jesus taught pre-Pentecost. They relegate Jesus to little more than an Old Testament prophet and a sacrifice for our sins — but, in their narrow-minded little theology, by no means is Christianity about following Jesus.

Today, when authors such as Ray Vander Laan point out the Jewish roots of the New Testament, they are helping to undo the damage of centuries of anti-Semitic bigotry in the Christian community. When scholars such as E. P. Sanders and N. T. Wright seek to rediscover the Judaism of the First Century and recast Paul in light of solid historical research, they are working against centuries of literally anti-Semitic Christian thought — indeed, against many serious efforts to de-Judaize Paul and build Christianity on Paul re-invented as a Gentile, while leaving the Gospels behind.

While I don’t take the Churches of Christ to have ever been consciously anti-Semitic, I believe the larger bias against Jews and Judaism crept into our doctrine and deeply impacted our perspective on Jesus.

Shortly after I graduated from one of our colleges, I worked on my church’s adult education curriculum. I dutifully outlined the major doctrines we should cover (Five Acts, Five Steps, …), and could find no reason to cover the Gospels in Bible class, because, in my view, the Gospels taught very basic moral lessons suitable only for teens and younger. (Yes, I was ignorant and full of myself for it.)

Regarding the instrument, Thomas Aquinas wrote, “Our church does not use musical instruments, as harps and psalteries, to praise God withal, that she may not seem to Judaize.” [Thomas Aquinas. Bingham’s Antiquities, Vol. 3, page 137.]

Why is it so obviously wrong “to Judaize” — unless Jews are inherently bad? And yet we’ve been blind to the bigotry of Aquinas. This is the same scholar who allowed punitive, discriminatory taxes on Jews and the forfeiture of their property and other harsh measures against Jews.

In other words, although those who make these arguments would often not be anti-Semitic at all, we’ve allowed an unconscious, cultural bigotry against the Jews to color our theological arguments and thus our view of Jesus.