On Break — And Some More or Less Related Topics 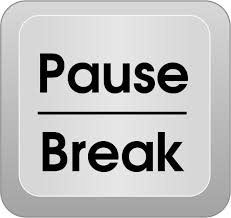 I have one more post to go in the current series, and then I’m taking a few days off. I’m not sure how long.

I’ll be dedicating myself to recovering from something called piriformis syndrome. My hip’s been hurting for the last, oh, 18 months and I’ve had about 18 different diagnoses.

But the professionals are all starting to line up behind

piriformis syndrome, and so I guess that’s what it is.

Now, “syndrome” means “we’ve seen this before and don’t quite know what to do about it.”

Just like it’s never good hearing a doctor say, “Interesting!”  It’s the boring conditions that are easily treated and cured.

I have no desire to help make my doctors’ lives interesting. And it seems that I’m some kind of interesting.

When the nerve is pinched long enough, then the surrounding muscles spasm, too. And they pinch other nerves. And so you have a syndrome.

I’ve been variously diagnosed with a failed L5-S1 fusion, sacroiliac-itis (I made that up. It’s really called “Wow, your SI joint seems to hurt a lot.”), trochanteric bursitis, and some other stuff I can’t remember how to spell.

So a nerve conduction study (could be used to replace waterboarding), a masseuse (a much more pleasant way to get a diagnosis), and a physical therapist now all agree on piriformis syndrome. And the treatment for the other things hasn’t helped, meaning it probably really is piriformis syndrome. (Or it could be another one of those butt muscles in the picture. It’s hard to tell.)

The conventional strategies are rest, exercise, ice, heat, stretching the piriformis, being careful not to stretch the piriformis, surgery, and avoiding surgery (since surgery can actually make it worse).

How easy is that? There are pills you can take, too — but thay liv u kina wuuzie wer u cant thenk orr wurk soe gud.

So on Tuesday, in an effort to avoid surgery, I’ll see a doctor who’ll stick a needle in the muscle with some medicine to force it to relax. At that point, the chain reaction should be interrupted so that I get better — along with lots of physical therapy to rebuild what was messed up in the last 18 months. If that doesn’t work, it’s the wrong muscle, and I guess we try another one.

The result should be a fairly prompt return to blogging (longtime readers know that my breaks usually don’t last long due to the highly addictive nature of blogging). Or I’ll be headed to surgery. (Not a fan.)

In the meantime, I can recommend some excellent reading alternatives. (Promise me you’ll come back here when I return!)

The Structure of Revelation: Four Visions

(More to come. And, yes, he’s going as slowly as me covering John’s Gospel. And I couldn’t be happier about it.)

Over the last year of so, Matt Dabbs has posted a series on helping a congregation become evangelistic, starting with Have We Lost Our Love for the Lost? (The link will take you to a listing of articles by Matt on evangelism. Start there and then click the links for “Newer Posts” way down at the bottom to continue through to his most recent articles.)

I highly recommend this series — and am terribly  derelict for not having mentioned it sooner.

The link to Willie’s testimony at Harding is missing. Here it is. It’s an edited version, well worth the time to listen.

My name is Jay Guin, and I’m a retired elder. I wrote The Holy Spirit and Revolutionary Grace about 18 years ago. I’ve spoken at the Pepperdine, Lipscomb, ACU, Harding, and Tulsa lectureships and at ElderLink. My wife’s name is Denise, and I have four sons, Chris, Jonathan, Tyler, and Philip. I have two grandchildren. And I practice law.
View all posts by Jay F Guin →
This entry was posted in Uncategorized. Bookmark the permalink.