So why does Genesis provide us with the material found in Genesis 1 – 11? These chapters aren’t obviously about God’s self-revelation.

Genesis tells the story of how God created humankind in fellowship with him, but also relates how that relationship was destroyed by the Fall. The destruction of all but Noah and his family in the flood gave humanity a second opportunity to maintain a relationship, but again sin interfered. The primeval history concludes with the important account of the Tower of Babel. Urbanization in Mesopotamia had provided fertile ground for the development of a new paganism aptly represented in the symbolism of the ziggurat. The Tower of Babel represented the definitive formulation of a brand of paganism that pervaded the ancient Near East in which mythologized deity was portrayed as having all the foibles of humanity. In so doing, humanity remade deity in its own image. 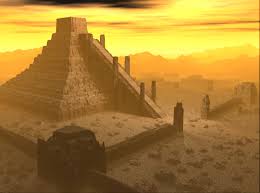 Elsewhere, Walton notes that the stairstep structure of the ziggurat was not to allow mankind to reach heaven but to facilitate the gods’ coming to earth.

The pagans had severely distorted the image of God. A correction was necessary.

The perception of God that swept the ancient world was incapable of providing a sound basis for a relationship with the one true God. The result was the need for God to vouchsafe an accurate revelation of himself. He therefore instituted a revelatory program by means of the covenant.

In short, Genesis 1 – 11 explains what happens when God is not sufficiently known. Why did the world rebel at the time of Noah? Why build the Tower of Babel? It was all because God was inadequately known.

Eden existed at a time and place where man had intimate knowledge of God. Man walked with God in the Garden in the cool of the morning. Sin had not yet obscured God’s image from our view.

But once sin entered, God became harder to see. Therefore, it became necessary that God himself take the initiative. Man had become so distant from God that only God could take the first step.

My name is Jay Guin, and I’m a retired elder. I wrote The Holy Spirit and Revolutionary Grace about 18 years ago. I’ve spoken at the Pepperdine, Lipscomb, ACU, Harding, and Tulsa lectureships and at ElderLink. My wife’s name is Denise, and I have four sons, Chris, Jonathan, Tyler, and Philip. I have two grandchildren. And I practice law.
View all posts by Jay F Guin →
This entry was posted in Covenant: God's Purpose, God's Plan, Covenant: God's Purpose, God's Plan, Uncategorized. Bookmark the permalink.