(John 4:1-3 ESV) Now when Jesus learned that the Pharisees had heard that Jesus was making and baptizing more disciples than John  2 (although Jesus himself did not baptize, but only his disciples),  3 he left Judea and departed again for Galilee.

This verse is rarely noted. We want to skip straight ahead to the Samaritan woman. But John put it here for a reason. Evidently, Jesus did not want his baptismal ministry to eclipse the baptismal ministry of John. Or was it, as some commentators suggestion, that Jesus was afraid of the Pharisees? Or not ready for a confrontation yet?

John doesn’t say. Was it humility? A desire to avoid stealing John’s disciples?

Did the Pharisees somehow profit if John’s ministry were to diminish? John the Baptist himself had only recently been quoted as saying that he must decrease while Jesus increases, but Jesus seems to have wanted to delay that day.

What does Jesus’ willingness to leave Judea and go miles away from John’s ministry say about our Savior?

No, he didn’t. Jesus could have gone around, to the east of the Jordan. It would have taken longer, but most Jews did this because Samaritans were known to kill Jews traveling through their territory.

(John 4:5-6 ESV)  5 So he came to a town of Samaria called Sychar, near the field that Jacob had given to his son Joseph. 6 Jacob’s well was there; so Jesus, wearied as he was from his journey, was sitting beside the well. It was about the sixth hour.

The well is about a mile (1.5 km) from the town. The sixth hour is noon. Jesus, being fully human, was hot, tired, and thirsty.

Drawing and carrying water was women’s work in that culture. The Samaritan woman had to walk a mile to the well to get water for her own use. Therefore, most women would go in cooler hours. To go to the well at noon would be a way to avoid a crowd — and the immoral Samaritan woman appears to have come alone, perhaps entirely on purpose due to her bad reputation.

A proper Jew did not speak to a woman outside his family in public. Moreover, the Samaritans were hated by the Jews. You see, we often most despise those who are most like us, because we can so easily see the differences. (Alabama fans are rivals with Auburn because of their similarities, not their differences. Alabama is far more unlike Cal Tech, but there’s no resentment in Alabama against a non-football playing school. They’re too different.)

The Samaritans were the descendants of Jews who’d intermarried with Gentiles after the Assyrians carried the northern tribes into captivity. Samaria was the capital of the Northern Kingdom.

A few Jews were left behind, and contrary to the Torah, they’d intermarried with the pagans, but they continued to worship God. When the Jews from the Southern Kingdom returned under Ezra and Nehemiah, the Samaritans were not allowed to participate in rebuilding the temple because of the need to preserve the Jews as a distinct race.

Well before the time of Jesus, the Samaritans had built their own temple on Mt. Gerizim, and they studied the text of the Torah, except that references in the Torah to Jerusalem were replaced with Mt. Gerizim.

The Jews, of course, insisted that God could only be worshiped in Jerusalem and considered the temple at Gerizim an abomination. A few decades before Jesus, before the Romans took over, the Jews were independent, and they used their army to destroy the temple at Gerizim, which the Samaritans had been unable to rebuild under Roman rule.

God’s plan was to restore the Samaritans to his Kingdom through Jesus. One step in the process was for Jesus to travel through the province — and to be alone at the well, a courageous decision for an unarmed, solitary Jewish rabbi.

(John 4:9 ESV) 9 The Samaritan woman said to him, “How is it that you, a Jew, ask for a drink from me, a woman of Samaria?” (For Jews have no dealings with Samaritans.)

As we’ll soon see, Jesus also knew her to be a particularly immoral woman. For him to speak with her would be unthinkable in that culture. She was shocked.

Now, the meaning of “have no dealings with” (literally, “use nothing in common”) is not that the Jews won’t speak with a Samaritan. The disciples had gone to the village to buy food — which surely involved speaking. Rather, as the NET Bible translators note,

The background to the statement use nothing in common is the general assumption among Jews that the Samaritans were ritually impure or unclean. Thus a Jew who used a drinking vessel after a Samaritan had touched it would become ceremonially unclean.

In other words, a Jew would not drink after a Samaritan. Not only did this involve racial prejudice, but Samaritans were considered unclean, so that drinking after a Samaritan would result in the Jew being unclean — making him socially untouchable.

What does this tell us about Jesus’ personality?

Samaritans reciprocated the Jews’ hatred in full. Why did she reply? Why not tell him to draw his own water? Why not throw the water in his face? Samaritans hated Jews with a passion we can barely imagine.

(John 4:10 ESV) 10 Jesus answered her, “If you knew the gift of God, and who it is that is saying to you, ‘Give me a drink,’ you would have asked him, and he would have given you living water.” 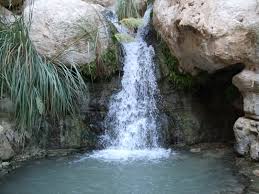 Living Water at En Gedi, near the Dead Sea

“Living water” is a Hebrew idiom for running water. In fact, I’m sure “running water” would sound very strange to someone not familiar with English — he’d imagine water trying to run as a marathoner runs.

Just so, “living water” sounds odd to English speakers, but it refers to water from a flowing stream.Water from a well, although surely clean, safe, cool, and refreshing, was not “living” because it was stationary.

Therefore, the Samaritan woman would have heard Jesus say that “he would have given you water from a stream,” and there was no stream anywhere near.

Jesus emphasizes that Living Water is a “gift from God.” It’s free. And his allusion is to the Old Testament.

(Jer 2:12-13 ESV)  12 Be appalled, O heavens, at this; be shocked, be utterly desolate, declares the LORD,  13 for my people have committed two evils: they have forsaken me, the fountain of living waters, and hewed out cisterns for themselves, broken cisterns that can hold no water.

God himself is referred to as “living water” by Jeremiah, the source of life. Trying to save yourself is like trying to catch water in a broken cistern, whereas God offers living water, where no cistern is needed because he provides “water” — life, salvation — like an artesian well or a waterfall.

(Zec 14:7-9 ESV)  7 And there shall be a unique day, which is known to the LORD, neither day nor night, but at evening time there shall be light.  8 On that day living waters shall flow out from Jerusalem, half of them to the eastern sea and half of them to the western sea. It shall continue in summer as in winter.  9 And the LORD will be king over all the earth. On that day the LORD will be one and his name one.

“Living waters” are part of Zechariah’s vision of the end times (reflected in Rev 22). Again, water represents God’s salvation and his gift of life.

We’ve already read prophecies where “water” and the Spirit are closely associated, that is, with water being used as a synonym or parallel with Spirit, either very plainly —

(Isa 44:3-4 ESV)  3 For I will pour water on the thirsty land, and streams on the dry ground; I will pour my Spirit upon your offspring, and my blessing on your descendants.  4 They shall spring up among the grass like willows by flowing streams.

— or else by referring to “pouring” out the Spirit —

(Eze 39:29 ESV) 29 “And I will not hide my face anymore from them, when I pour out my Spirit upon the house of Israel, declares the Lord GOD.”

But the Samaritans did not recognize the prophets as scripture (just the Torah), and so it’s hardly surprising that the woman missed Jesus’ point entirely. She was hardly a scholar on the order of a Nicodemus.

However, to a student of the Old Testament, Jesus was plainly referring to the Holy Spirit. This is missed by many Christians, and so John later explains it for us —

(John 7:37-39 ESV) 37 On the last day of the feast, the great day, Jesus stood up and cried out, “If anyone thirsts, let him come to me and drink.  38 Whoever believes in me, as the Scripture has said, ‘Out of his heart will flow rivers of living water.'”  39 Now this he said about the Spirit, whom those who believed in him were to receive, for as yet the Spirit had not been given, because Jesus was not yet glorified.

(John 4:11-12 ESV)  11 The woman said to him, “Sir, you have nothing to draw water with, and the well is deep. Where do you get that living water?  12 Are you greater than our father Jacob? He gave us the well and drank from it himself, as did his sons and his livestock.”

It seems odd, at first, that the woman would consider Jesus’ promise to be a claim to be greater than Jacob. But she was a very literally minded person. Jacob dug the well many centuries before. To get living water out of a well — that is, to dig an artesian well — would require digging an even greater well. Jacob was a hero. To claim to outdo Jacob seemed absurd to her.