To set the mood —

In the hills of mystery,
In the foggy web of destiny,
You can have what’s left of me,
Where we were born in time.

I love quest novels. You know, books like The Lord of the Rings where the hero is given a quest that requires great courage and strength. In the end, the quest is finally accomplished, and the readers are left to wonder whether the quest was predestined by the hand of fate.

Did Frodo Baggins really have a choice? Could he have refused the quest to destroy the Ring of Power? And when he finally got to the point of dropping the ring into the volcanic power, the lust of power overcame even him. He put the ring on his finger, turned invisible, and prepare to wield the awesome power of the One Ring.

But Gollum, who’d nearly been consumed by the ring, bit off Frodo’s finger — revealing the desperate desire for power that had destroyed all of his personhood other than powerlust. In their struggle, Gollum and the ring fell into the flames, destroying the ring and the being destroyed by the ring.

Did Gollum have a choice? Did Sam? Did Gandalf?

At one level, they clearly make many difficult and painful choices. They struggled to find the courage and perseverance. They made decisions, some wise and some foolish, but even the foolish decisions ultimately resolved themselves in ways that allowed the quest to continue.

Who’s in charge of the history of Middle Earth? The beings who live there? Or some Powers That Be behind history, behind free will, constantly intervening to make certain that the story ends as it’s supposed to?

You see, quest stories ultimately get their theme — and their power — from Scripture, because this same paradox exists from Genesis to Revelation. Did Eve have a choice? Did the serpent? Did Adam? What if they’d made other decisions?

Quests help us understand real life, because real life is a quest.

If God chose Jesus to be our atoning sacrifice before the beginning of the earth, then did we have any choice but to sin and to fall? Did Jesus really have a choice to be crucified?

Why would Abram’s faith count for anything if he really had no choice? Was David a man after God’s own heart only because God manipulated time and space to be certain he was born with a certain personality? That certain events happened that shaped his life?

Did God make the blind man blind just so Jesus could do a miracle? Or did God demonstrate that even blindness can show the glory of God? And why this blind man and not the countless other blind and lame and diseased children of Israel? 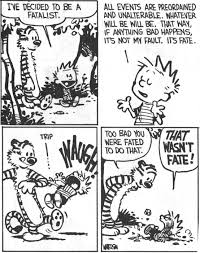 You see the problem. If we over-emphasize the sovereignty of God — his ability to make things turn out as he pleases — we cheapen all human courage and goodness. Indeed, we cheapen evil, as well, because the bad people have no choice either. We’re just marionettes on God’s stage, free from any real moral burden and any real moral credit.

If we over-emphasize free will, then God becomes a mere bystander, a witness of that his Creation produced but in no way to be credited or blamed for the outcome. After all, people made all the choices that really matter.

But, of course, reality is far more complex than either extreme. Not only is God the Creator, he is the Intervener. God involves himself in human affairs. He makes changes. He makes choices. And God’s decisions affect history — both the tiny individual histories of each human and the grand history of the world. God is the biggest player on this stage.

Then again, God doesn’t dictate every single choice. The gunman who shot the children in Connecticut a few weeks ago was not forced by God Almighty to do that. He was not God’s will that those children die.

But then, neither is at as simple as God makes good things happen and people make bad things happen. People are fully capable of doing good things, too. They are, after all, made in the image of God.

So what’s the solution? Is there one? Is this one of those unanswerable questions?

(Deu 29:29 ESV)  29 “The secret things belong to the LORD our God, but the things that are revealed belong to us and to our children forever, that we may do all the words of this law.”

(When I was a teenager, one of my friends in Sunday school class had this verse memorized. He recited it every time the teacher asked a hard question. He sounded very, very wise — and the teacher inevitably agreed and let us move to the next verse.)

So here’s how I’ve got it figured.

* The Reformation Calvinism/Arminianism debate gets us nowhere. The two sides have their proof texts, they’ve dug in, and 500 years later, no one has convinced the other side of anything. It’s a dry hole. Time to dig somewhere else. That is, it’s great to lay out the problem, but merely picking sides and pounding each other with proof texts hardly solves anything.

* It’s really about the fact that God dwells outside of time. Modern physics teaches what theologians have known for centuries: when God created the heavens and the earth, he created time.

There may be time in heaven, but it’s provably not the same time dimension we experience here. After all, Einstein demonstrated — provably — that time moves at different speeds in this universe. If God is constrained by our time, which one of our time frames is he constrained by?

* Time, being a created thing, exists outside of God and does not bind God. Rather, God controls time.

Now this is so foreign to human experience that it runs contrary to every instinct in us, but it’s common knowledge to physicists, and has been for 100 years.

Saying this will upset the Open Theists among us. They have their arguments, which I respect. But I have physics on my side. The only way God doesn’t see the future as present to himself is if God chooses not to look. But choosing not to look has nothing to do with causation.

This is obvious to some, impossible to understand to others. But maybe the following will help.

In human experience, we humans can only predict the future to the extent the future is driven by the laws of nature. We can predict the future position of the moon 100 years from now because the moon’s position is not determined by free will. But I can’t predict my wife’s mood 1 day from now.

Now, because God can predict my wife’s mood (and he can), we assume that he does so the same way we do — by extrapolating from known facts and running the math forward. That is, surely, we think, God knows the workings of my wife’s brain so well that he can do the math to figure her moods a day or even a year from now, just as I can use a computer to predict the future behavior of the moon mathematically.

But that thinking assumes my wife has no free will. It’s deterministic at its core, and it’s just not true.

That’s not how God works. He’s not like us. We must not limit him to human methods. We can only extrapolate the future known present facts. But if God chooses to do so, he steps outside of time, looks at the part of the universe that, to us, is “future,” and he just knows because he sees. Perfectly.

On the other hand, because God is a player on the stage, his actions can change the future. The future is not set. God can intervene, and his actions ripple across the fabric of space-time to change the future in ways that cannot be scientifically predicted (because there are all these beings with free will involved).

Where does this leave us? Well, not with every question answered. Indeed, I think it’s hard to get much beyond what I just said in terms of predestination and foreknowledge, just because human brains aren’t wired to think like God. We don’t exist outside of time and have no idea how to experience existence otherwise.

Do these few philosophical/scientific observations solve every moral and philosophical problem? No, but maybe that’s enough to help us start to understand the paradox that is the blind man at the Pool of Siloam.

But there’s one more thought to add.

My name is Jay Guin, and I’m a retired elder. I wrote The Holy Spirit and Revolutionary Grace about 18 years ago. I’ve spoken at the Pepperdine, Lipscomb, ACU, Harding, and Tulsa lectureships and at ElderLink. My wife’s name is Denise, and I have four sons, Chris, Jonathan, Tyler, and Philip. I have two grandchildren. And I practice law.
View all posts by Jay F Guin →
This entry was posted in Calvinism, John, Uncategorized. Bookmark the permalink.