To speak of the disciples as “orphans” is to speak as a father. This is why, back in John 13:3, Jesus refers to them as “little children.” Until now, Jesus has been a rabbi, a friend, a traveling companion, but not a father to the disciples.

Moreover, we often forget that the disciples were likely quite young. A rabbi normally took on disciples at age 14. He’d been with them three years. They might have been only 17 or 18 by this time. Imagine having been with Jesus these three years as a teenager!

Of course, Jesus might not have followed conventional rabbinic practice, but they couldn’t have been much older. The crowds immediately recognized his disciples as rabbinic students. If they’d been in their 30’s, like Jesus, the crowd would have drawn very different conclusions. Rabbis did not have students that old.

Like other rabbis of his day, Jesus had disciples called talmidim, devout followers who were probably in their mid-teens.

The Mishnah(1) describes the educational process for a young Jewish boy in Jesus’ time.

At five years old [one is fit] for the Scripture, at ten years the Mishnah (oral Torah, interpretations) at thirteen for the fulfilling of the commandments, at fifteen the Talmud (making Rabbinic interpretations), at eighteen the bride-chamber, at twenty pursuing a vocation, at thirty for authority (able to teach others)

This clearly describes the exceptional student, for very few would become teachers but indicates the centrality of Scripture in the education in Galilee.

In short, it’s easy to see how Jesus would have had paternal feelings toward his disciples, both as a human rabbi and as the incarnation of God. Hence, he promises them, “I will not leave you as orphans; I will come to you.”

It’s very unlikely that Jesus is referring to the Second Coming. That’s a long time to be an orphan! Nor is he referring to his resurrection. Come back for a few weeks and then leave them as orphans? Surely, not!

No, Jesus was also speaking of the times from Pentecost until now. Nothing else would make sense. The apostles would need Jesus with them while they were preaching, evangelizing, being persecuted, and ultimately martyred! That’s what’s on Jesus’ mind.

Some commentators see a reference only to Jesus’ post-resurrection appearances, but I think it’s truer to the text to consider these as part of the promise, but not all of it. John 14:19 certainly seems to be pointing in the direction of the resurrection — which will, of course, greatly comfort the disciples. That’s an essential, foundational part of the promise. But I think there’s more.

Rather, Jesus is also referring, in part, to the coming of the Spirit at Pentecost. After all, he’d just promised “another Helper.” The Spirit is very much in context and fits very well with the thought.

But we should also recall —

Whatever the sense of that passage is, it sure seems to fit here. But what is Jesus’ point?

This is going to seem a little crazy, but do you remember this challenging passage?

(John 1:51 NET)  51 He continued, “I tell all of you the solemn truth– you will see heaven opened and the angels of God ascending and descending on the Son of Man.”

It doesn’t make sense in a literal way at all. It’s a reference to —

(Gen 28:10-13 ESV) 10 Jacob left Beersheba and went toward Haran.  11 And he came to a certain place and stayed there that night, because the sun had set. Taking one of the stones of the place, he put it under his head and lay down in that place to sleep.  12 And he dreamed, and behold, there was a ladder set up on the earth, and the top of it reached to heaven. And behold, the angels of God were ascending and descending on it!  13 And behold, the LORD stood above it and said, “I am the LORD, the God of Abraham your father and the God of Isaac. The land on which you lie I will give to you and to your offspring.”

Jesus is the ladder — Jacob’s ladder. He’s the connection between heaven and earth.

Now, way back in the Creation 2.0 series, we considered the Biblical theme of the separation and joining of heaven and earth: Creation 2.0: Simply Christian.

Jesus, through his death and resurrection, somehow began the healing process of rejoining and reintegrating heaven and earth. In so doing, he became the ladder that connects the two. He holds the two together and is so powerfully mending the breach that, at the end of time, heaven will descend to earth and God’s throne will be here! There will be no separation for God from his people any more.

(Rev 21:2-3 ESV)  2 And I saw the holy city, new Jerusalem, coming down out of heaven from God, prepared as a bride adorned for her husband.  3 And I heard a loud voice from the throne saying, “Behold, the dwelling place of God is with man. He will dwell with them, and they will be his people, and God himself will be with them as their God.”

Until then, Christians are bound more closely to heaven than others. The Spirit dwells within us, tying us to heaven, the home of the Spirit and giving us access to heavenly things that others do not enjoy.

Even before then, in some sense, we’re already sitting with Jesus on  his throne!

(Eph 2:4-6 ESV) 4 But God, being rich in mercy, because of the great love with which he loved us, …  raised us up with him and seated us with him in the heavenly places in Christ Jesus … .

How is Jesus present with his followers today? Well, it’s entirely possible for a divine being to be present even not in the body. We understand that.

How is that presence manifested? Well, through the Spirit. Through Jesus’ being constantly aware of us, our needs, our prayers — just as God is. But especially by connecting us with heaven. 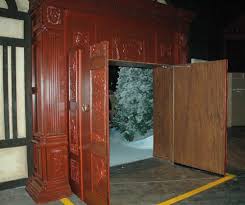 He is the ladder. He connects us with the throne above, with the New Jerusalem, and most especially, with God himself. He spans the gap. He makes it happen.

How aware we choose to be of the presence of the heavenlies is up to us. Just as C. S. Lewis explains in the Chronicles of Narnia, heaven is at hand, not far away at all. We just don’t see it except through the eyes of faith.

This is from Baker’s Evangelical Dictionary —

In the Heavenlies. Paul stresses the believer’s solidarity with Christ. Since a believer is “in Christ” and since Christ is in heaven, the believer is “in the heavenlies” (en tois epouraniois). Accordingly, God has blessed the believer “in the heavenly realms with every spiritual blessing in Christ” ( Eph 1:3 ). This precise phrase occurs only five times in the New Testament, and only in Ephesians ( 1:3 ;  1:20 ;  2:6 ;  3:10 ;  6:12 ). The believer’s heavenly blessings depend on Christ’s heavenly session ( Eph 1:20 ) and the spiritual union each believer shares “with Christ” ( Eph 2:6 ). God does not merely apply the ministry of Christ to believers. He sees believers with Christ wherever he is and he is now in heaven.