So who is this Jesus? Well, let’s pick out a few characteristics we find in John.

(It would be fun to work through the Synoptics as well, as there is so much more and different material in them, but this is about John’s Gospel.)

First, Jesus is pretty self-confident. It’s not that he never hesitates, but he normally proceeds with incredible certainty.

Really? That simple? Just a “Follow me” and Philip jumps up, leaves his family, and follows Jesus all over Judea, Samaria, and Galilee? Yes.

What would sound like unspeakable presumption coming from anyone else’s lips is everyday discourse for Jesus.

Jesus also had this way of saying things that surely were as hard to understand for his immediate hearers as for us, such as —

(John 1:51 NET) 51 He continued, “I tell all of you the solemn truth – you will see heaven opened and the angels of God ascending and descending on the Son of Man.”

Nathaneal surely knew the story of Jacob’s Ladder better than we do, having been raised on the Torah. But even though he caught the allusion, it takes some serious reflection and study to understand in what sense Jesus will be shown to be like Jacob’s Ladder. I have to figure Nathaneal listened, memorized the saying, and decided he’d sort it out later. He surely discussed it with his fellow disciples, and later may have asked Jesus to explain.

Jesus, however, has a view of the world less bounded by time than ours. He’s just not nearly as worried about “right now” as we are. For Jesus, it’s okay if Nathaneal figures it out weeks or even years later. For now, it’s just important that he hears and remembers it.

Later, when Nathaneal sees Jesus move easily between heaven and earth — and bring some of heaven to earth in the form of the Spirit — he begins to grasp the ladder that Jesus is. But that was years later — and Jesus saw no reason to explain it immediately. Nathaneal had to figure it out for himself when the time is right.

Jesus, you see, places great confidence in his followers to make their own decisions. He leaves the interpretation of many of his sayings (not all, but most) to the disciples. They have to sort it out, talk about it, and decide. Even if they miss some points and get some wrong, Jesus wants his disciples to so internalize his thinking that he doesn’t have to explain everything. He doesn’t feel any need to make it easy.

You see, it’s not entirely about getting the right interpretation. It’s also about becoming so one with Jesus, knowing Jesus and his heart so well that the interpretation becomes possible. It’s not a mere intellectual exercise. It’s not just knowing the right answers to the questions. It’s delving deeply into the process, the mindset, the worldview of Jesus so that we can see where he’s going with these hard sayings. It’s the effort to understand that reshapes us as much as the answers we ultimately find.

Would you want Jesus as a teacher in a class for credit? Well, you’d learn far, far more than the usual teacher has to offer — but he’d work you to a frazzle trying to keep up. Jesus is not for the lazy. He expects us to work hard to keep up. (But his grace is such that he scales the tests!)

Perhaps my favorite exchange in John is —

I have a mother, too. And since I’m an obedient son, she can be equally presumptuous with me — in ways that only a mother can be. I mean, you can grow up to be King of the Universe, and to your mother, you’ll still be Mary’s little boy. And she’ll expect you to do as you’re told, because you’re a good boy. At age 30.

This tells us a little about Mary, too. I mean, what would it have been like to mother a miracle-working child? Well, you’d have to be one tough mom — and she evidently was.

We also see the generosity of Jesus. He made wine in abundance — more than enough. He made wine of a quality that was better than needed.

Just so, when he fed the 5,000, there were 12 baskets left over! Why make leftovers? Was it strictly necessary? Of course, not. The point surely is the abundance of God’s gifts given through Jesus. 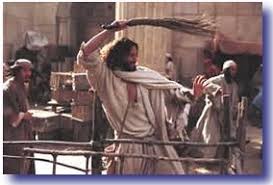 Jesus and his whip

Many are troubled by —

(John 2:15 NET) 15 So he made a whip of cords and drove them all out of the temple courts, with the sheep and the oxen. He scattered the coins of the money changers and overturned their tables.

This was the act of a passionate, courageous man. He could have been arrested. He might have been scourged. I mean, there were temple guards nearby, all under the authority of the priests. They had swords, numbers, the power of the state, and could have done Jesus severe physical harm.

Even a strong, athletic man could have been easily overcome by the guards — even with a whip. You can’t keep the entire crowd at bay — particularly the guards, who surely wore armor.

There was something about his presence, his personality, that kept everyone at bay. I imagine that it was not so much fear of Jesus’ whip as the august air of a king. And no one there had ever met a real king claiming his Temple as his own. 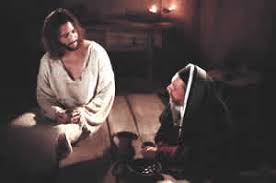 The Pharisee at night

Also revealing is this exchange —

(John 3:1-3 NET) Now a certain man, a Pharisee named Nicodemus, who was a member of the Jewish ruling council,  2 came to Jesus at night and said to him, “Rabbi, we know that you are a teacher who has come from God. For no one could perform the miraculous signs that you do unless God is with him.”  3 Jesus replied, “I tell you the solemn truth, unless a person is born from above, he cannot see the kingdom of God.”

Nicodemus shows up, seeking to leave the darkness to enter the light. He declares that Jesus is “come from God,” and Jesus launches into a speech. This is a genuinely powerful man in Jerusalem circles. He’s taking greats risks to see Jesus. And Jesus doesn’t even let him ask a question!

Jesus knew what he needed to hear better than Nicodemus knew what to ask. And so he shares with this stranger, a member of a sect that hated Jesus and would soon have him killed, some of deepest, most profound messages penned to paper anywhere by anyone.

John 3 is filled with famously popular, oft-quoted verses that nearly define the entirety of the gospel. And Jesus shares this with a Pharisee who’d not even asked for this information!

But that only makes sense. After all, the gospel is given first to those who need it.

Jesus didn’t look for an opening other than the presence of a man who needed to hear how to be saved.